We meet the Woods family from Sapphire Beach who packed up their home in early 2016 for a life on the road. Their travels have taken them to jaw-dropping locations around Australia and as photographers, Tom and Sherrin have documented it all beautifully along the way.

Tom and Sherrin Woods appreciate that they’re a little unusual in their preference of being joined at the hip, even after the better part of 25 years together. I catch up with them both over the phone from their current base of Coolum Beach and despite knowing that the focus of our chat is their adventurous lifestyle, Tom still pipes up with, “You could turn this into a love story if you want.”

Perhaps it’s that self-containment as a couple and as a family that makes their unconventional existence work so well.

“We have a lot of friends with great relationships who, by their own admission, need that separation from one another from time to time and we totally understand that – it’s almost the norm but we’re a little different in that we’re better together and want to experience everything together,” says Tom. 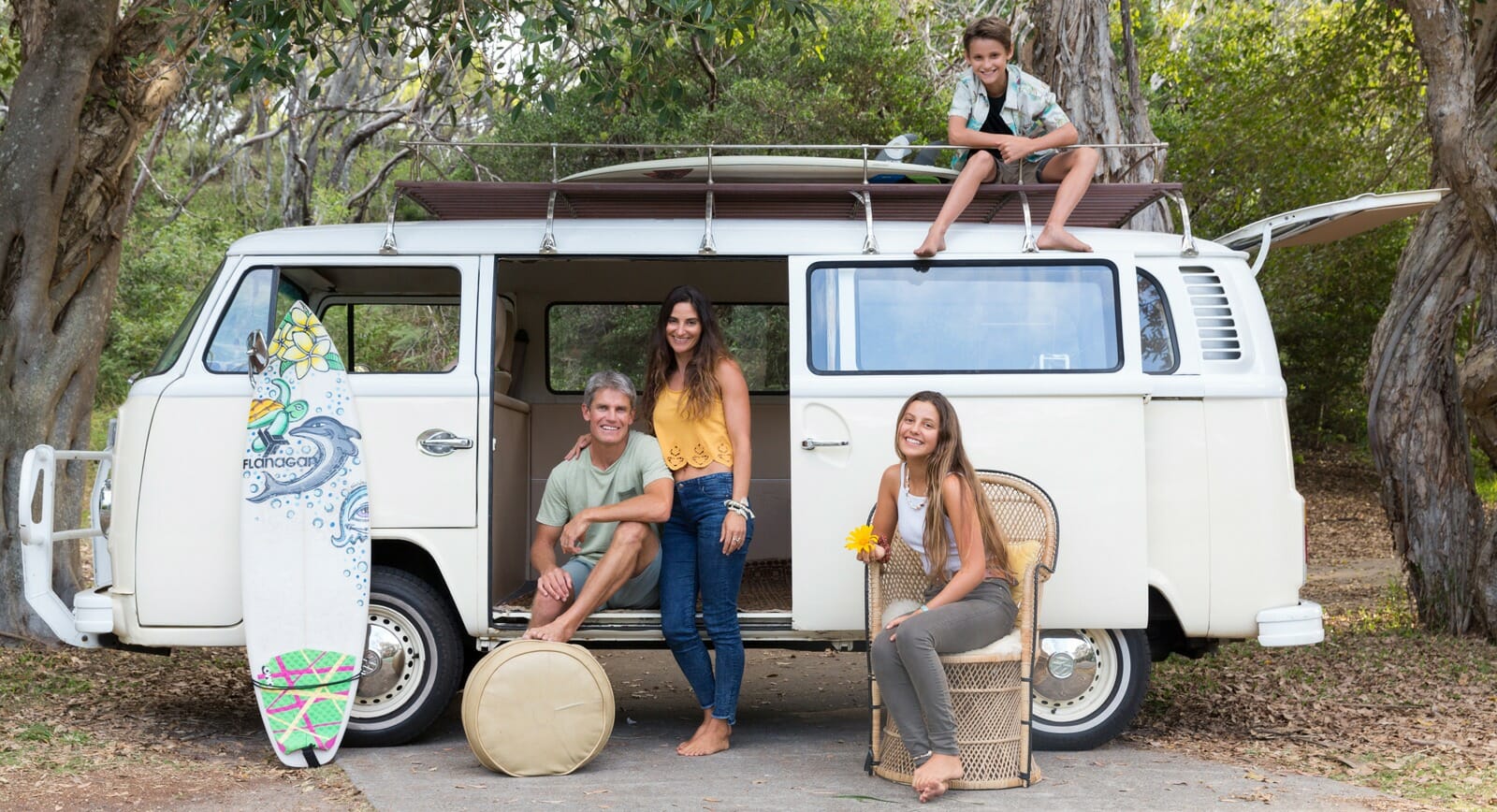 Tom and Sherrin’s connectedness also helps explain why, even when visiting some of the most impressive surf locations around the world, Tom was left feeling somewhat empty.“I was getting opportunities to shoot in Indonesia and The Maldives, but I wasn’t sharing these amazing places with the people I really wanted to and that left me feeling a bit hollow. I knew I was lucky to get these cool photography gigs in destinations that felt like paradise, but I’d be counting down the days to get back to Sherrin and the kids.”

Let’s rewind a bit though to when Coffs Coast was home. Sapphire Beach on the northern beaches had been their base for about 15 years – long before kids entered the picture. And Tom and Sherrin were practically kids themselves (not long out of their teens) when they left their hometown of Adelaide to travel around Australia.

They fell hard for the north coast of NSW and decided that between the climate and the waves, Coffs was a perfect fit. As budding photographers, they also felt it was the ideal location to pursue their goals of turning professional. With the beach at their doorstep and World Heritage national parks close at hand, they were spoilt for choice photographically.

But despite developing careers and establishing a home studio that allowed plenty of family time, surf photography can be a solitary pursuit as Tom discovered and it was time to change tack. Travel, photography and family. How best to combine it all?

A few years ago, ST Images (you guessed it, short for ‘Sherrin’ and ‘Tom’) cleverly created a niche market for themselves in holiday park photography. In the latter part of 2015, the Woods family photographed 23 parks between Newcastle and the Gold Coast. They would make a long weekend of the job, returning home between shoots. ST Images were building a strong portfolio in a specialised field. Tom then thought, ‘Wouldn’t it be cool if we could go to all of these places not just as a holiday but as a lifestyle?’ And in early 2016, with a few months of work lined up with the BIG4 group, the family decided to take the show on the road.

Of course, it hasn’t all been smooth sailing. While Delta and Billy were thrilled by the adventure, having been inspired by the journals their parents kept from their travels, establishing a school routine through distance education took a few months. Sherrin also had to adjust to the role of teacher.

These days though, Sherrin says Delta and Billy’s education is soaring and is complemented by their many day-to-day experiences away from the books like visiting museums and galleries or going bushwalking or to see a waterfall.

Both kids have a tremendous appreciation of the natural world. Tom describes Billy as a wildlife fanatic and says Delta is like a little mermaid. And it’s easy to be inspired when days are spent snorkelling with manta rays or seeing dugongs. For Sherrin, “Our week on Lady Elliot Island was one of the most incredible experiences of our lives. We’d spend the days snorkelling near manta rays, turtles and reef sharks and the kids would learn about living plastic free, island survival and desalination. Or they’d chat to marine biologists on the island about all the beautiful creatures we were seeing.”

For Tom, Shark Bay in the north-west of WA is another unbelievable destination. “I flew over it and discovered the most amazing colours and scenery – the likes of which I’ve never seen before. The landscape is insane. The region offered such mind-blowing photography. That was where I saw my first dugong. Billy particularly loved the thorny devils there. What was remarkable was how diverse the Western Australian coastline is and so very different from the east coast too.”

Tom and Sherrin work as they go and of course, they’ve spent countless nights in holiday park cabins. But when asked about the downsides of being away from home or being on the move so much of the time, they struggle to come up with an answer. “We do meet people along the way who say they really miss their community, but I think we’re unique in that for us, family is enough.” I have one final question for them, sure to create some discussion between the pair.

So, of the two of you, who is the better photographer?

They both laugh and Tom answers, “Actually we’re different and the best results are collaborative. I don’t know how to fly a drone and Sherrin is getting some epic aerials. When it comes to wide-angle shots like surf photography and landscapes, they’re probably my strengths and..” (Sherrin interjects) “I’m best with a macro lens.”

Given that the initial plan was just a few months on the road, the couple are surprised by how long they’ve been away. Work has been steady and in between jobs, the family explore. Sherrin acknowledges that there may come a time soon when the kids simply want to stay put but for now, everyone is making the most of it.

She adds, “This time is really valuable and it’s beautiful that we can share it as a family. Not all families get the time they want before their kids go out into the world.”

And when that time comes, and Delta and Billy set off to make their mark, somehow, I don’t quite see them settling into office jobs…

To watch a short video of their travel highlights, read their blog or see their photography, go to www.stimages.com.au

You can also find the Woods family on Instagram @stimages